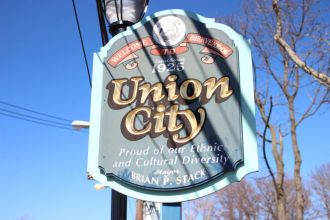 He had been living in Jersey City for nine years and commuting to his job in Queens. But with his wife expecting their first child next month, they needed a bigger space than their studio in Newport. They looked in Fort Lee, but were unable to find something that suited their needs, he said.

Then they found a two-bedroom condo in a recently renovated high-rise on Central Avenue. They moved into The Lenox in February.

“It was much better priced than any other location,” he said. “With our budget, we’re not even able to get a studio in [Newport].”

Gold Coast without a coast

Union City is part of the “Gold Coast”–the roughly 19 mile stretch along the Hudson River that spans several municipalities in Hudson and Bergen counties. Jersey City, Hoboken, Weehawken and Edgewater tend to dominate the discussion when it comes to growing demand for property in the region, and a quick drive along the waterfront partially explains why.

Union City–bounded by Jersey City, North Bergen, Weehawken, Hoboken and West New York–doesn’t have waterfront property and doesn’t have direct access to a PATH station or ferry. What the city does have is pedestrian-friendly residential and commercial areas that are not only close to transit options, but offer a diverse mix of restaurants, businesses and entertainment.