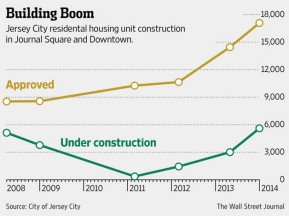 “Jersey City’s residential construction boom is spreading beyond its waterfront area to neighborhoods farther inland where planners and developers have long dreamed about building with little to show for it until now.

In August, for example, Kushner Real Estate Group and National Realty Advisors broke ground on the first of three planned towers at a giant development in Journal Square, known as Journal Squared, which will have a total of 1,840 units and 36,000 square feet of retail. Builders are currently excavating and underpinning the project’s foundation.”

“New towers are being built near the waterfront by developers including the Kushner-Pasternak group and a venture of Ironstate Development Co., and Mack-Cali Realty Corp”

“In August, Jersey City developer the Shuster Group opened leasing at the Art House, a 119-unit building with paintings for sale displayed throughout the hallways, in the historic Powerhouse Arts district. The building is close to 50% leased, with rents starting at $1,995 a month for a studio.

“There’s a lot of forces bringing new population into the area,” says Eyal Shuster, founder of the Shuster Group.”