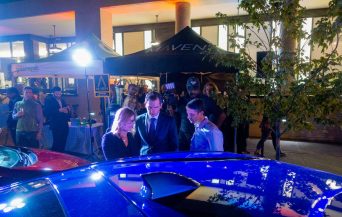 Tonight, the City Council of Jersey City will vote on an ordinance that would create an electric vehicle (EV) charging station “zone” for electric or plug-in hybrid vehicles. If passed, the zone will be the first of its kind in New Jersey and would put Jersey City at the forefront of the movement towards eco-friendly travel alongside other forward-thinking cities such as Palo Alto, California.

In 2014, the first public EV charging stations were installed in Jersey City outside The Oakman and The Art House in the Powerhouse Arts District. These stations, in the last year alone, have shown an increase in usage of almost 400%. With a total of 4000 EV changeups to date, the stations have saved 2,987 gallons of gas and taken the equivalent of 5.6 gas fueled cars off the road for one year.

The charging stations also brought the first available EV car sharing program to Jersey City. Offered by Maven™, a General Motors brand, the company provides access to the Chevrolet Volt, a plug-in hybrid vehicle that can be reserved through the Maven mobile app. Jersey City is Maven’s first presence in the New York Metropolitan area and since its launch in October 2016 has been one of Maven’s top locations.