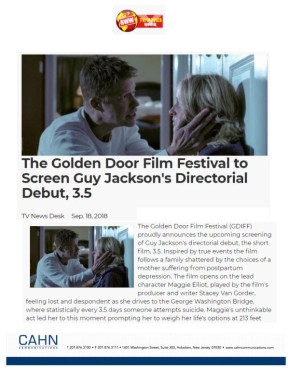 Daniel Reiser, who portrays the character of John in 3.5, returns to the screen after a 15 year hiatus from acting. He is a graduate of New York University’s Tisch School of the Arts and has numerous stage, television and film credits of note. Among them include Sliders, My Secret Identity, Scent of a Woman, HBO’s Autopsy, Hurlyburly, Criminal Genius, Fool for Love, Mousetrap. Dan lives in Tenafly, New Jersey with his wife, Gabrielle and four boys, and is Vice President, US Property Management, Leasing and Acquisitions for Panepinto Properties. It’s no surprise with Daniel’s love for the arts that Panepinto Properties and Panepinto Galleries have been sponsors since the very first festival in 2010. After all these years, it is truly an honor that Daniel Reiser is starring in a film that was chosen as an official selection of the Golden Door Film Festival.