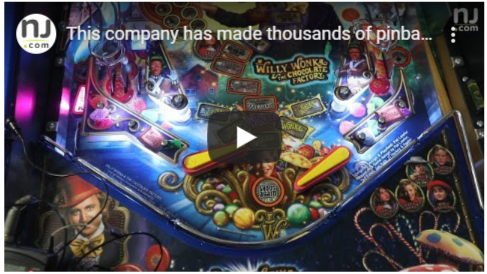 This company has thousands of pinball machines in New Jersey

I’m no pinball wizard. But I did help put the magic into a Willy Wonka & the Chocolate Factory pinball machine made by Jersey Jack Pinball, a company founded in 2011 that has already become an industry leader in the use of LCD screens, LED lighting and other technologies in the world-renowned, high-tech arcade games it manufacturers in an industrial park in Lakewood.

Jersey Jack is one of the 450 manufacturers, distributors, and other companies doing business at the 2,000-acre Lakewood Industrial Park, a commercial complex that includes 4 million square feet of industrial space, where the occupancy rate is so high that three new buildings with a total of 146,000 square feet of warehouse/industrial space are now under construction.

So when I was asked if I’d be interested in visiting the park, where 10,000 people quietly crank out everything from dental spurs to blintzes, I said that I just might be — especially since the news out of Lakewood these days tends to focus on growing pains of its Orthodox Jewish community or the public school system’s perennial budget woes. What would really interest me, I told them, would be to try my hand at some of the work his tenants do.

And not long after that, I found myself rolling up my sleeves and standing on the assembly line at Jersey Jack, and donning rubber gloves and a hair net at Trinity Seafood, which processes and distributes some of the porgy, bluefish and other commercial catch along the Jersey Shore, not to mention a share of the salmon, swordfish, lobster, clams, oysters and countless varieties of marine fare that’s reeled in around the world.

Jersey Jack was founded by industry veteran Guarnieri 36 years after he answered Heinz Magdalinski’s want ad for an electromechanical pinball repairman in Union. Guarnieri’s vision for his own creations was to advance the level of pinball machine technology, and his first model, a Wizard of Oz-themed machine unveiled in 2013, was a hit with pinball’s first LCD monitor, not to mention a spinning farmhouse and glittery red shoes for flippers. The company now employs 60 people who manufacture what Guarnieri would only say were “thousands” of pinball machines a year. 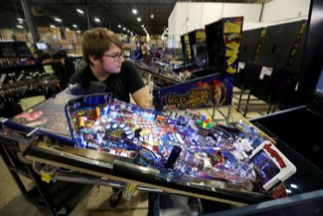 Jersey Jack machines — which also include the The Hobbit, Dialed-In and Pirates of the Caribbean — range in price from $7,500 for the Willy Wonka standard edition to $12,500 the special edition of the Wonka game, which is based on the 1971 Gene Wilder film, adapted from Roald Dahl’s novel Charlie and the Chocolate Factory.

The Willy Wonka is Jersey Jack’s fifth and latest creation, having debuted this past summer, when the game blog Roarbots.com called it “A world of pure imagination,” and the Silverball Museum Arcade in Asbury Park assured visitors to its home page, “We’ve got your golden ticket!” I worked briefly on one new machine under the watchful eye of Jersey Jack veteran assembly worker Dave Johnson, 47, of Long Branch, former custodian.

“It’s awesome,” Johnson said of his job. “When I build these things, I want the customer to be able to enjoy the game. That’s the main thing.”

I stood with Johnson on an assembly line for the “play field,” or main surface of the game, a wooden board with a computer-guided paint job and pre-cuts for component inserts. The play field progressed through a series of assembly stations, where the components are screwed to the back of the board in accordance with instructions laid out on a sample play field hanging over each station, like a template, with its components already in place. There are more than 3,000 pieces to each machine.

To give me a first-hand feel for the process, Johnson had me install a pair of so-called pop bumper leaf switches, which control the response of the bumpers — the mushroom-like bobs that light up, ring out, and snap back at the touch of the heavy silver balls.

I picked two of the metal switches out of a bin, grabbed a pair of #8 half-inch wood screws from another bin, aligned the two holes on the switch frame with two partially drilled holes on the underside of the wooden play field, and screwed each one down using a hand-held power drill hanging chest-high over the station. Then I repeated the steps for a second bumper switch. All in a day’s work.

Dave would repeat those same steps and others hundreds of times that day, and every day. But I was done, relieved that I didn’t screw up — Jack’s pun, not mine.

A few blocks from Jersey Jack, still in the industrial park, I smelled fish as soon as I stepped into the lobby of Trinity Seafood’s 13,000-square-foot processing and distribution center. That said, it was a fresh-fish smell, at a plant that prides itself on its cleanliness, strict temperature controls and rules against non-employees entering the production or storage areas without scrubbing down, donning gloves and hairnets, and having a Trinity representative accompany them.

In my case, and NJ Advance Media photographer Ed Murray’s, our guide was Trinity’s president, Mike Carson, a 49-year-old former long-line fisherman and father of two from Little Egg Harbor. Carson moved the business to the industrial park from Asbury Park in 2016, after it was bought by Sysco Meat Group, and since then has increased Trinity’s annual sales volume from $28 million to $44 million, while boosting its workforce from 50 employees to 64, plus six temps.

Trinity took in close to 9 million pounds of raw fish and seafood from as far away as New Zealand and as close as Belford, and after filleting it or simply inspecting and repackaging it, shipped out 6.3 million pounds to Sysco warehouses around the country, for delivery to supermarkets or other retailers or to restaurants. The rest is sold for pet food, fertilizer or other uses, Carson said, but none of it is thrown away.

After a brief introduction in the lobby, and a peek at the fully functional kitchen where vendors occasionally cook up samples of their product, Carson took me, Ed and Sudler Vice President Jeff Hale to wash up and suit up before leading us inside to see the seafood. In the main processing room, the air was 35 degrees, and hoses were constantly spraying surfaces and fish with cleansing ozonated water, while a dozen workers bundled up under waterproof gear filleted Canadian farm-raised Atlantic Salmon that was then boxed with crushed ice to be shipped out that afternoon.

In a short-term storage and inspection room, I got a lesson in what to look for when inspecting fish for freshness: eyes that were not sunken or had lost their moist membrane; flesh that was firm and sprung back when squeezed; gills that were still purplish.

Then I got handed several varieties of the chilled, scaly recent arrivals to have a look for myself, and I took care, knowing they would end up on somebody’s plate — maybe mine.

All of them passed, as far as I could tell. But don’t worry, the Trinity folks double-checked my work.