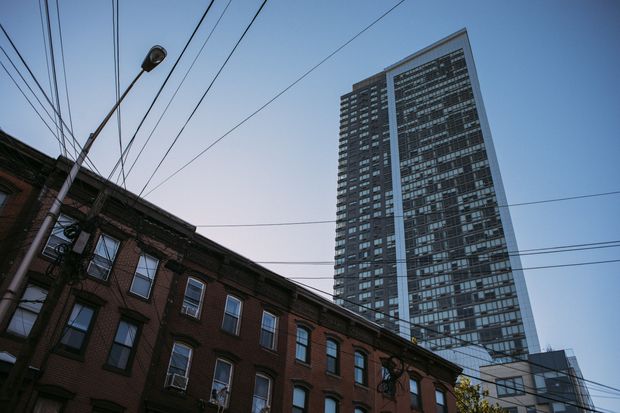 The 46-story 235 Grand Street includes a top-floor studio apartment with one of the best views in the building. PHOTO: JOSE A. ALVARADO JR. FOR THE WALL STREET JOURNAL

Manhattanites looking for more space for their money have for years defected to Jersey City.

But what is drawing them across the river lately are compact studios in Manhattan-style luxury buildings.

Jersey City developers are betting that filling buildings with more studio apartments will pay off, as tenants trade personal space for high-end amenities like shared lounges, co-working areas and Zen gardens, at a price that comes cheaper than would larger, one-bedroom units.

At some luxury buildings, the studios are the main attraction.

“Studios are no longer relegated to the lower floors of a building or shoehorned in where larger apartments wouldn’t work,” said Jacqueline Urgo, president of new development advisory company The Marketing Directors, who worked with the developers of the 46-story 235 Grand Street, where 425-square-foot studios start at $2,850 a month.

Nearly half the renters come from New York City, she said.

“We have a studio on the top floor with perhaps the best southern view of the Statue of Liberty and New York Harbor in the entire building,” Ms. Urgo said.

Michael Barry, the president and chief executive of Ironstate Development Co., which co-built 235 Grand with KRE Group, said he has gradually included more studios in his developments in recent years, after noticing leasing patterns at one of his earlier Jersey City buildings, which had fewer studios than his more recent projects.

“We would have almost no turnover in studios, or if we did, they would go immediately…whereas we might have standing inventory of one-bedrooms at certain periods of time,” Mr. Barry said.

Other new buildings under construction in Jersey City offer more studios than any other unit type. In the last phase of the Enclave, a three-building rental development led by BNE Real Estate Group, 65% of the 238 apartments will be studios.