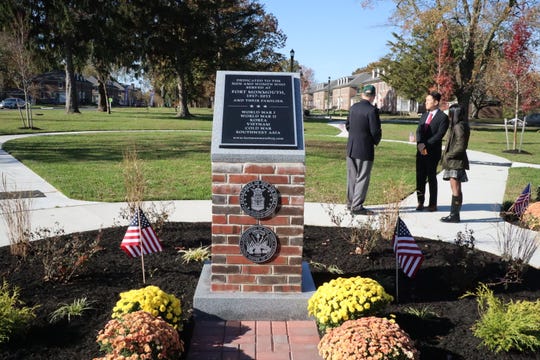 A new veteran’s memorial dedicated to those who served at Fort Monmouth is at the center of East Gate Park in Oceanport. The park was dedicated on Nov. 4, 2019.

OCEANPORT – A humble, yet sturdy veterans’ memorial has been erected at the newly opened East Gate Park, an open-space of manicured lawns, pedestrian pathways and gardens on former Fort Monmouth land.

The memorial and park pay homage to the history of Fort Monmouth — which opened in 1917 as a U.S. Signal Corps base, and closed in 2011, a victim of the Base Realignment and Closure Act.

The act created the framework by which the U.S. closed hundreds of military installations in the post-Cold War era.

East Gate Park is at the center of East Gate Oceanport, rows of red brick townhomes, and duplexes that are refurbished officer homes and part of the fort’s second life in the private sector.

The developer of East Gate Oceanpoort is RPM Development. The group collaborated with veterans, Fort Monmouth’s economic redevelopment team, Palermo Edwards Architecture and Design 446 on the memorial and park.

Occhipinti who served at the fort from 1999 to 2003, and later oversaw the fort’s closing as director for plans, training, mobilization and training.