via Kate Rounds/ Bayonne – Life on the Peninsula 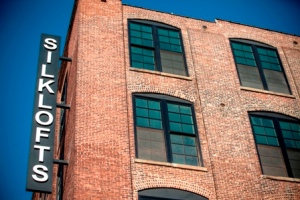 Developer Doug Stern is so excited about his new project, he’s waiting in the parking lot, hardhat on head, all energy and expectation. He’s a developer of commercial and industrial real estate and a private equity investor. We’d carved out a tiny slice of sun during the horrible winter of 2014 to tour the residential development that everyone calls “Maidenform.”

The complex was built between 1890 and 1910 by the Schwarzenbach-Huber Co., a key player in North Hudson’s silk industry. The company had been one of the largest manufacturers of broad and novelty silks. An early description of the company’s West Hoboken facility describes it as a “model” plant with “plenty of light, air, and ventilation”— characteristics that define Stern’s vision for the residential complex that will be known as Silklofts.

Though the building started life as a silk factory, it was as a bra-manufacturing plant that it became famous. On Sept, 25, 1929, the legendary Maidenform Inc. acquired the Schwarzenbach-Huber mill, which was in foreclosure proceedings. The Maidenform complex includes several main buildings and outbuildings in the courtyard. The structures are built of brick with heavy timber columns and beams, distinguishing features in the new Silklofts renovation.

The timbers are made of long-leaf yellow pine, which is prized for its density. Stern invites me to pick up a sawed-off ceiling joist, it weighs almost as much as I do. Long-leaf yellow pine takes up to 150 years to mature and can live 500 years. It’s likely that the wood used for the building’s columns and beams was grown more than 250 years ago.

The facility served as Maidenform’s main manufacturing plant until 1990 when production was moved south, and the building became Maidenform’s corporate headquarters. The company occupied the building for about 76 years, until 2007 when they put it up for sale, A year after Stern acquired the property and began to redevelop it, the site was approved as a historic preservation project by the National Parks Service, 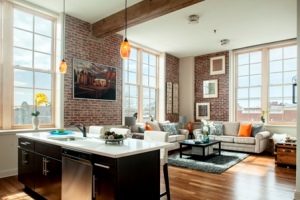 Silklofts will offer five studios, 26 two bedrooms, 40 one bedrooms, and six artists’ lofts. Depending on the unit, tenants will be able to move in roughly between May and September. The units feature exposed brick, 12- to 20-foot ceilings, huge wood windows up to 11 feet high with “divided lights”—panes of smaller glass separated and held in by supporting bars. Each unit will have eight-foot solid core doors—flush doors with a solid material placed within the door skins. The front doors will be mahogany, and the building’s original brick archways will be opened up. The kitchens will feature quartz countertops and eight-foot chef islands, Wall construction will include a Resilient Channel sound-reduction system, and floor pads will minimize noise between residences. Bedrooms, kitchens, and living rooms will have bamboo floors and three-quarter-inch solid oak gunstock wood floors. There will be a washer/dryer in every unit. Amenities include secure onsite parking, gym, and pocket park with herb garden, pizza oven, and fire pit. Stern is pursuing a LEED Silver-rated designation by using bamboo flooring, Argon gas-filled sealed units between window panes, energy efficient appliances, high-efficiency ductless heat pump HVAC, quartz countertops made from recycled materials, and brick and wood salvaged from the construction process to build walls, floors, and art pieces. That process avoids the use of millions of tons of concrete and steel and its associated carbon footprint.

The day I visit, the word “homes” is top of mind for Stern. “These are homes, not apartments.” he emphasizes “This is a community, not just a place to sleep.”  The subtext is that the care that has been put into construction and the quality of materials will make it a home and not just a crash pad. The windows are a major point of pride. The largest cost $3,500 each, and there will be artwork in the lobby by famed photographer Peter Lik.

Our trek to the back buildings involves bogarting our way though mounds of glazed snow, so it is literally warming to hear Stern describe what it will be like back here on fine summer evenings: picnic tables, pizza oven, fire pit. It’s a way for residents to “get to know their neighbors,” Stern says.

There are five floors in the main building with five homes per floor. We start on the third floor where Stern shows me a studio. As with all the homes, the ceilings and windows are huge. There is a walk-in closet and washer/dryer. The view through these tall windows is of the pocket courtyard and the original factory chimney, but it’s what’s beyond that’s mesmerizing— an urban landscape that is uniquely Bayonne, an almost surreal tableau of elevated light-rail tracks; marshland; Highway 440; white oil drums; the Winners sign, evoking the Great Gatsby’s T.J. Eckleburg billboard; and in the distance, the town’s signature windmill, seemingly frozen in the cold air. If you love Bayonne, you’ll love this cityscape, which reflects our proud history of industry and production, embodied in the building that will become Silklofts. Stern calls it “urban art.”

On the fifth floor, we look at a spacious two-bedroom that also boasts two bathrooms. But by far, its most exquisite feature is the view through the south-facing windows. The day I’m there the sun is just setting over the Bayonne Bridge, suffusing the loft with gorgeous winter light. The price range-depending on the home—is between approximately $1,500 and $2,700.

NOT IN A VACUUM

Silklofts is being developed against a larger backdrop of commercial and residential development in Bayonne. Harbor Station North at the Peninsula at Bayonne Harbor, a 30-acre tract, east of the 45th Street light rail station, is slated for redevelopment by Carl Goldberg, Marc Berson and Partners,

who are expected to build 700 high-end residential and commercial units on this large swath of the former military terminal. The city is also reviewing expressions of interest for Harbor Station South, which is earmarked for retail and commercial uses, including hotels and destination shopping venues.

Stern is especially excited about artists’ lofts that will be built in one of the back buildings. You don’t have to be an artist to live there, but they will feature large open spaces, which are essential for an artist’s work space.

The history of urban planning and urban renewal is rife with examples of artist pioneers, who venture into abandoned warehouse districts, creating studios, galleries, and a town’s cultural footprint. They draw visitors to their DIY arts districts but soon are driven out by soaring real-estate prices, and then it’s off to the next undiscovered warehouse, mill, or factory.

This has happened in cities from Austin to Boston, and right here in our own backyard, whether it’s New York City’s Soho; the Yardley building in Union City, a former soap factory, which now houses businesses like cabinet makers and portrait painters; the Neumann Leather building in Hoboken, which currently houses artists’ studios; the 111 First St. building in Jersey City, a former cigarette factory, which housed an artist colony and was infamously torn down in 2007. Where does Silklofts fit into this picture?

“From the beginning of time, artists have been in the vanguard, recognizing the beauty and value and uniqueness of these types of projects,” Stern says. “The price point might be hard for starving artists, but we could attract artists to split a two-bedroom. I expect the tenant base to be young, urban professionals who want and like urban art—young bankers, looking for something different.”

The next day, a friend asks me to meet for a drink at Lot 13, a neighborhood bar that happens to be across the street from Silklofts. Without my coaxing, a patron starts a conversation about what she calls “Maidenform.” She says, “It’s too expensive. Who in Bayonne can pay those prices?” The truth is, the prices are way lower than similar projects in Hoboken, Jersey City, or Brooklyn. And speaking of Brooklyn, Steve Gallo, the city’s business administrator, has spoken of Bayonne as the “new Brooklyn.” But it’s a good question: Does Bayonne have the artsy, cultural edge that has made Hoboken, Jersey City, and Brooklyn a draw for young, hip—and sometimes well-off—young people?

“The reality,” Stern says, “is that that Bayonne is the next cool place. It is not the cool place yet.”

“I dreamed I barged down the Nile in my Maidenform Bra.” This was just one of many famous “I Dreamed …” ads, made between 1949 and 1969, securing market dominance for Maidenform Inc., “makers of bras, girdles and swimsuits.” Features included “spoke-stitched cups for Cleopatra curves” and “reinforced undercups for everlasting uplift.” The “I Dreamed …” ad campaign is considered one of the most successful marketing efforts of the 20th century.

Everything about Stern’s redevelopment of the property speaks to maintaining the authentic structure of the building and flavor of what was made there.

To that end, he plans to adorn the public areas with beautiful prints of the ad campaigns that made Maidenform a mainstay (excuse the pun) of American manufacturing. There will also be archival photographs of the building, and historic objects, such as a “key box” used by security guards.

Stern is no ordinary developer. He’s pretty young—45— with a zeal, ethic, and sense of history as solid as those pine timbers. “Many developers ask themselves, why spend money?” Stern says. “My approach if why shouldn’t I? People see and recognize a high-quality product. It’s all about value.”