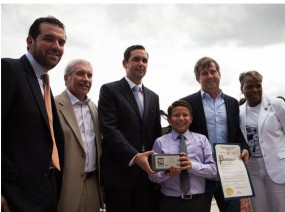 One of the hottest luxury rental buildings in Jersey City, 18 Park, officially opened yesterday evening at a ceremony hosted by developers Ironstate and KRE on the building’s landscaped roof deck.

In front of a small crowd of people in suits and dresses, Jersey City Mayor Steve Fulop lauded the 11-story, 422-unit building’s emergence as an example of “urban revitalization.”

“We are filling these buildings as quickly as we are putting them up,” he said, as servers armed with champagne and hors d’oeuvres sifted through the audience. “This building is an example of everything good that is happening in Jersey City.”

The 18 Park Ave. building with a mostly gray exterior boasts “modern design, exceptional amenities and an ultra-convenient downtown location,” according to a press release distributed at the event.

Walking into the building’s lobby, one is greeted by walls encased with wood configured in an interlocking rectangular pattern. Model one-bedroom and two-bedroom units on the third floor, furnished simply and colorfully, gave off the impression of being neat, modern and compact.

The Statue of Liberty and the Manhattan skyline are clearly visible from the roof deck, thanks to the building’s C-shape design, which maximizes views of an adjacent marina and the Hudson River waterfront.

Located in the Liberty Harbor North neighborhood near Paulus Hook and right next to the Marin Boulevard Light Rail Station, the glass-and-brick building has already leased 200 residences and 80 residents have already moved in, the release stated.

On the building’s website, one-bedroom units with one-bathroom are listed at approximately $2,600 a month, while several two-bedroom, two-bathroom units begin at $3,300 per month.

The building will also be the new home of the Boys & Girls Club of Hudson County, which will hold its own grand opening in September. Gary Greenberg, executive director of the nonprofit, called the change “a dream that’s come true.”

“It’s been about four and a half years to make this dream come true,” he said. “[The developers] did everything possible to make it happen.”

The new space for the Boys & Girls Club will feature a state-of-the-art gymnasium, classrooms and a STEM center sponsored by a partnership between Best Buy and Intel, Greenberg said. He added that a charter high school located inside the club will also be opening up in September.

The old building of the Boys & Girls Club, located at 1 Canal St., was sold to KRE and Ironstate, which “also allows that space to be better used,” he said.