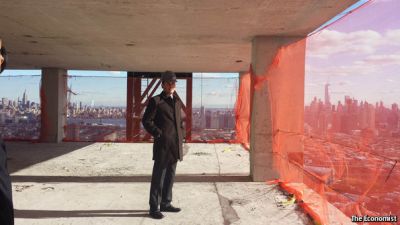 In a report yesterday,  The Economist examines Mayor Steven Fulop,  Jersey City growth, and development. The article includes a quote from our client, Jonathan Kushner of The KRE Group.

AT THE topping out ceremony held on the upper floors of the first of three towers being built in a hitherto unloved corner of Jersey City, Steven Fulop, the mayor, gazed across the water at Manhattan’s skyline, New York Harbour, the Statue of Liberty and bits of his home state. He shook his head and said to himself, “this is crazy, this is crazy”.

In a city once notorious for political corruption, Mr Fulop sometimes sounds like a character in a Frank Capra film. He is the son of Romanian immigrants who owned a delicatessen in nearby Newark. Mr Fulop is the grandson of Holocaust survivors. After the September 11th attacks, he left his job at Goldman Sachs, a bank, to join the marines. He served in Iraq in the war’s early months. After his deployment he returned to finance and to Jersey City. After an unsuccessful run for Congress, he was elected to the city council in 2005. He had little party backing and was outspent. His 2013 victory over Jerramiah Healy, the sitting mayor, represented a break from the city’s history of political patronage.

The tower, in Journal Square—a neglected commercial and residential district—is part of the first sizeable development there in half a century. Jonathan Kushner, the developer behind the Journal Square project, says “Jersey City has become a t-bill for investors”. Some others, who are not talking their book, seem to agree with him.